Editor’s Note: This is mirrored from RayWenderlich.com, and it was my first ever post on his website!.

Are you a busy Swift developer, with no time to learn Node.js, but still feeling drawn to server-side development? This Kitura tutorial will teach you how to create RESTful APIs written entirely in Swift.

You’ll build a “Today I Learned” app to help you learn and remember common acronyms. Along the way, you’ll learn how to:

Note: It’s possible to use Kitura with simply a text editor and a standalone Swift installation, which makes it possible to run Kitura even on Linux! However, this tutorial uses Xcode to take advantage of autocomplete and the nuances of a familiar development environment.

You’ll use a database called CouchDB in this Kitura tutorial. This is a NoSQL database that strictly enforces JSON and uses revision keys for updates. So it’s safe — and fast!

Homebrew, a popular package manager for macOS, is the easiest way to install CouchDB. If you don’t have Homebrew installed already, open Terminal and enter this command:

Enter your password if prompted. You should see Installation Successful once it completes.

Next, enter this command to install CouchDB:

Once it’s installed, enter this command to start CouchDB:

To confirm CouchDB installed and started successfully, open a web browser and navigate to http://localhost:5984. You should see something like this:

Note: If you’d prefer not to install CouchDB directly and have Docker installed, you may run it in Docker using the command:

Before you can dive into this Kitura tutorial, you’ll need to first understand a little about Kitura and REST.

REST is an acronym for Representational State Transfer. In RESTful apps, each unique URL represents an object. Non-unique URLs represent actions, which are combined with RESTful verbs like GET to fetch objects, POST to insert, DELETE to remove and PUT to update objects.

Backend development often involves many components working together. You’ll only be concerned with two backend components in this Kitura tutorial: the API and database.

For example, if you want to populate a table view with a list of acronyms and their meanings, your client app sends a GET request to the backend. In practice, your app requests the URL http://yourAPI.com/acronyms.

The API receives your request and uses a router to decide how to handle it. The router checks all available routes, which are simply publicly accessible endpoints, to determine if there is a GET route ending in /acronyms. If it finds one, it executes the associated route’s code.

The /acronyms route then does the following:

This results in the following interaction between the API and database:

If an API is RESTful, then it must also be stateless. In our example, you can think of the API as the orchestrator, commanding data to and fro in your ecosystem. Once the request is fulfilled, the state of the API and its routes should be unchanged and able to handle the next request.

Just because the API is stateless doesn’t mean it isn’t allowed to store or modify objects. The API itself doesn’t store states, but it does query and update the database to fetch, store and modify objects’ states.

Setting up the Kitura Tutorial Project

This uses the Swift Package Manager to create a new executable.

Next, enter the following command to open Package.swift with Xcode:

Replace the entire contents of Package.swift with the following:

Here’s what each of these commands does:

Save this file and go back to Terminal, where you should still be in the same directory containing Package.swift. Enter the following command:

This will generate a lot of logging, ending with logs about compiling your Kitura tutorial project. You’ll see this output at the end:

Note: In case you get errors from swift build, enter the following in Terminal to verify your Swift version:</p>

If your version is lower than Swift 4.1, this is likely your problem. To fix this, make sure that you have the latest version of Xcode 9 installed and then run the following command:

...where Xcode.app should be replaced with whatever you called Xcode 9.

If you're still having trouble, it's possible you're using swiftenv or another Swift version management tool, and you may need to manually set your Swift version to 4.1.

Here's the command to do this if you're using swiftenv:

Still in Terminal, at the root directory for your Kitura tutorial project, enter the following command:

You should see this output:

Enter this command to open your new Xcode project:

You’ll then be greeted with this view: 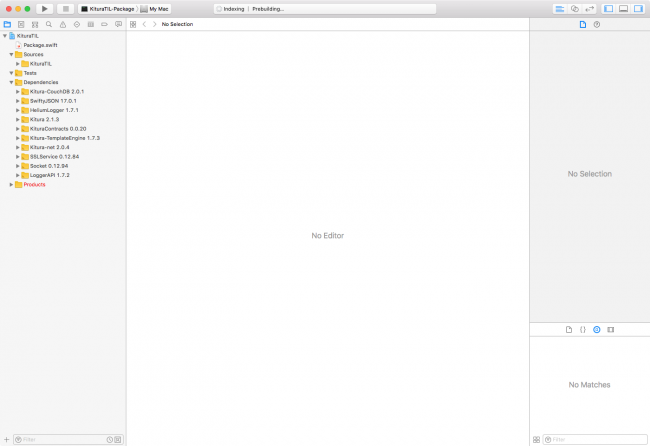 From here, you need to update the KituraTIL-Package scheme to run your executable. Go to the top of your Xcode window, and click the scheme pane where it says KituraTIL-Package. You should see this dialog: 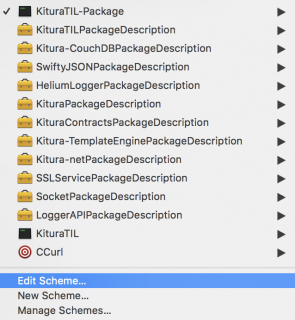 Click Edit Scheme, and another dialog will open. In the middle of the dialog, click the dropdown for Executable and select KituraTIL. 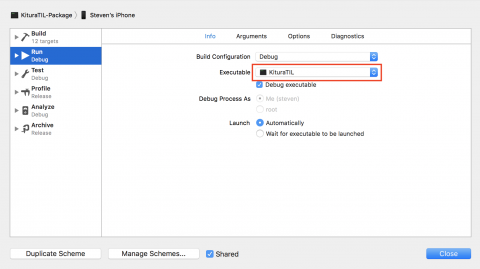 Click Close in the bottom-right corner of the dialog to dismiss it.

Next, make sure you’ve set to run this scheme on My Mac by clicking to the right of the scheme dropdown that you clicked earlier and selecting My Mac from the list:

Build and run, and you’ll see this printed to the console:

You can safely ignore any compiler warnings about deprecations. Kitura and CouchDB use a few methods that were deprecated in Swift 4, but this shouldn’t cause any problems.

Awesome, you’re now ready to get your backend app up and running!

First, create a new Swift File named Application.swift in the same directory as main.swift. Make sure to add this file to the KituraTIL executable target:

Next, replace the contents of this file with the following:

Here’s what this does:

With your App class created, open main.swift and replace its contents with the following:

Here you create an App instance and run it.

The HeliumLogger.use() command sets up HeliumLogger as the default logger for Kitura. It’s good practice to “log early and log often”.

Build and run, and you should see log messages from Kitura appear in the console.

Next, navigate to http://localhost:8080 in your browser, and you should see this page: 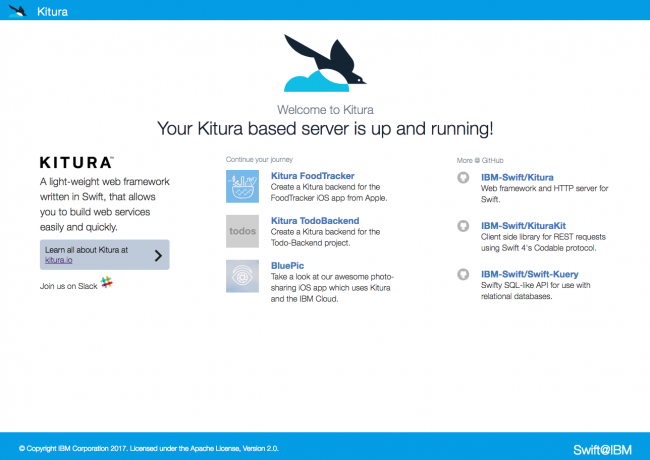 In this section, you’ll create a model type that represents an acronym.

Create a new file named Acronym.swift and remember to add it to the KituraTIL target.

Replace the contents of this file with the following:

Here’s what this does:

Build and run your project to make sure everything builds properly.

Codable is simply a typealias that combines the Encodable and Decodable protocols. This ensures conforming objects can be converted both to and from external representations. In particular, Kitura uses this to easily convert instances to and from JSON.

Before Kitura 2.0, you had to pass a request object into every endpoint closure, parse properties manually, cast appropriately, do necessary transformations and finally create JSON to send as a response. It was a lot of work!

Fortunately, you can now leverage the power of Kitura’s Codable Routing to significantly reduce the boilerplate code in your routes. Win! You simply need to make your models conform to Codable to take advantage of this, as you did above.

With this theory out of the way, it’s now time to connect your API to CouchDB.

Open Application.swift, and replace its contents with the following:

Let’s go over these changes:

Next, complete postInit() by replacing // 3 with the following.:

Here’s what you just did:

Next, complete createNewDatabase() by replacing // 4 with the following:

Here’s what this does piece by piece:

You won’t be able to implement finalizeRoutes just yet. You first need to complete your persistence layer. That’s what you’ll do in the next section.

Create a file named AcronymPersistence.swift and add it to the KituraTIL target.

Replace the contents of AcronymPersistence.swift with the following:

Here’s what this does in detail:

Setting up Your Codable Routes

You’re finally ready to create your routes. Create a new file named AcronymRoutes.swift and add it to the KituraTIL target.

Replace the contents of AcronymRoutes.swift with the following:

Let’s look at the routes you just set up:

Notice the conciseness of each of your routes; the beauty of Kitura’s Codable Routing is that you don’t need to worry about requests or responses directly. Instead, Kitura will recognize the request that’s made, route it to the appropriate endpoint, execute just the relevant code and even create a response for you. Nice!

To complete your app, open Application.swift and complete finalizeRoutes() by replacing // 5 with the following:

Build and run your Kitura tutorial project, and navigate to http://localhost:8080 to ensure your API is still running.

Then, open Terminal and enter the following command:

If everything is set up correctly, you should get back an empty JSON placeholder ([]). This means you’ve correctly set up your GET route!

Now try adding a new acronym to your backend. Type the following command in the same terminal window:

Hit Enter, and you should see a response like this:

To verify this actually saved to the database, enter the following GET command one more time:

If you get back the same JSON you entered inside an array, then congratulations! You’ve successfully created a working API!

Where to Go From Here?

This tutorial has introduced you to Kitura by building a backend API. However, that is not all Kitura can do! In part two of this tutorial series, you’ll learn how to use Kitura and Stencil to build a website that includes a front end.

You can download the completed version of the project using the Download Materials button at the top or bottom of this tutorial.

As part of Kitura 2.0, The Swift@IBM team has created a command line interface for Kitura that streamlines generating a similar starter project, without requiring you to write any code yourself! You can try this out (after completing this tutorial, of course) by entering the following commands in Terminal:

If you’d like to learn more about Swift 4’s Codable protocol, check out our tutorial about it here.

You can also read through IBM’s introduction to Kitura Codable Routing here.

There’s a lot of material on the internet about Kitura, and some especially great stuff available directly from IBM! If you’d like to continue learning about Codable Routing and other Kitura 2.0 features, check out this tutorial.

I encourage you to comment in the forum below if you have any questions or comments!